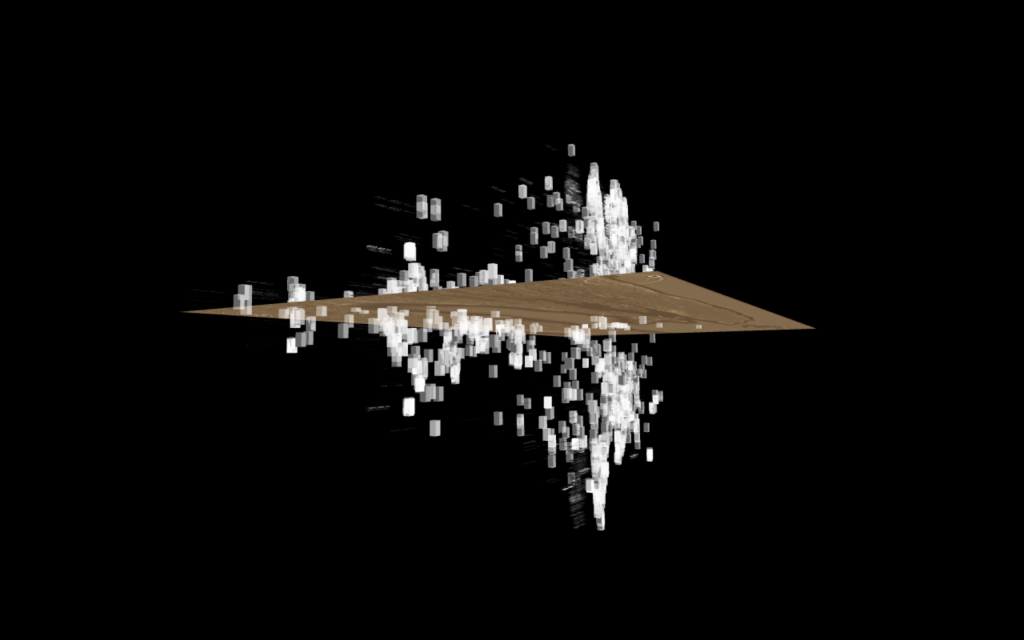 “this drowned world lies beneath a skin,
of moving water, as within ;
The glassy surface of their frown
The ladies’ grieving passions drown
And can be seen to ebb and flow
In Crimson as the currents go”
Christabel LaMotte, The Drowned City in Possession by A.S.Byatt

“No city is more inclined . . . to enjoy lift and flee care. And to make the leap from life to death less abrupt, the inhabitants have constructed an identical copy of their city, underground”

Sombrer, (“sunk” ) is an audio visual installation that collects filtered Twitter feeds to create the architectural of an imaginary sunken city. It is inspired by the Breton myth of the city of Ys, which was constructed at the shoreline (thought to be at the Baie de Doaurnenez on the Western front of France). In some versions, Ys is only visible at low tide, at high tides, it is fully submerged, or lost. Like Ys, Sombrer also resides at the intertidal, finding it is a quest totally dependant on the ebb and flow of the oceans that surround it.

To create this city, Twitter feeds are filtered for keywords ‘lost’ and ‘found’ over the installation period.   The instances of each are visualized – ‘lost’ tweets aggregate to form buildings ‘under’ the surface, ‘found’ tweets aggregate a towering city awash. A synthetic ebb and flow is then calculated from the data, creating a digital tide that is visualized in tide tables daily, as well as used to modulate the evolution of the soundscape in the gallery.

The elements of the gallery space are simple. A pebble beach carries remnants of a city awash, its memories embodied within faceless boxes that echo a musical refrain. A mirror becomes the way we know the 2 facets of this city, awash and submerged as one state ebbs and flows into the next.

The soundscape is made from both a 6 channel speaker setup and a collection of 5 parametric speakers, 2 of which are mounted on pan-tilt motor heads and are randomly assigned points in space. The work was first presented at the DXARTS Ballard Fab Lab and will be presented at other venues later this year. 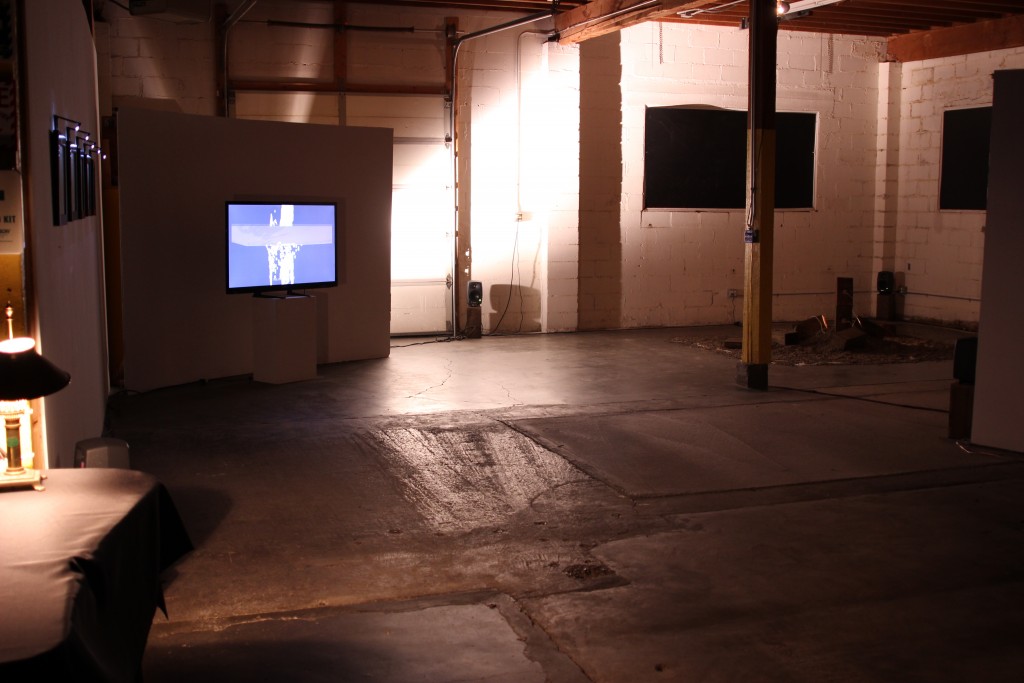 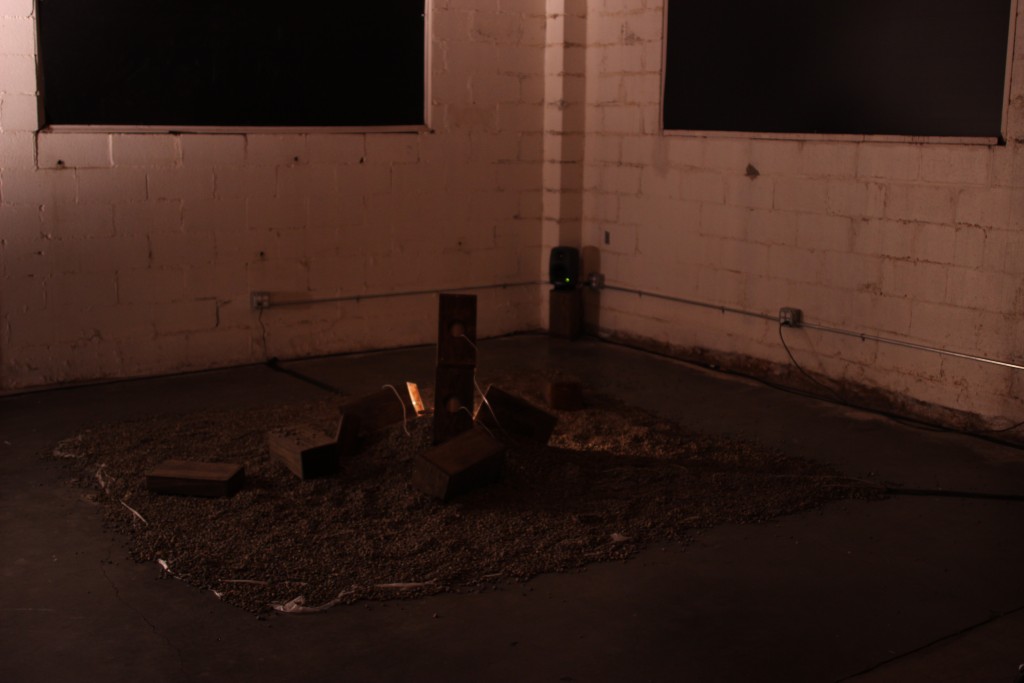 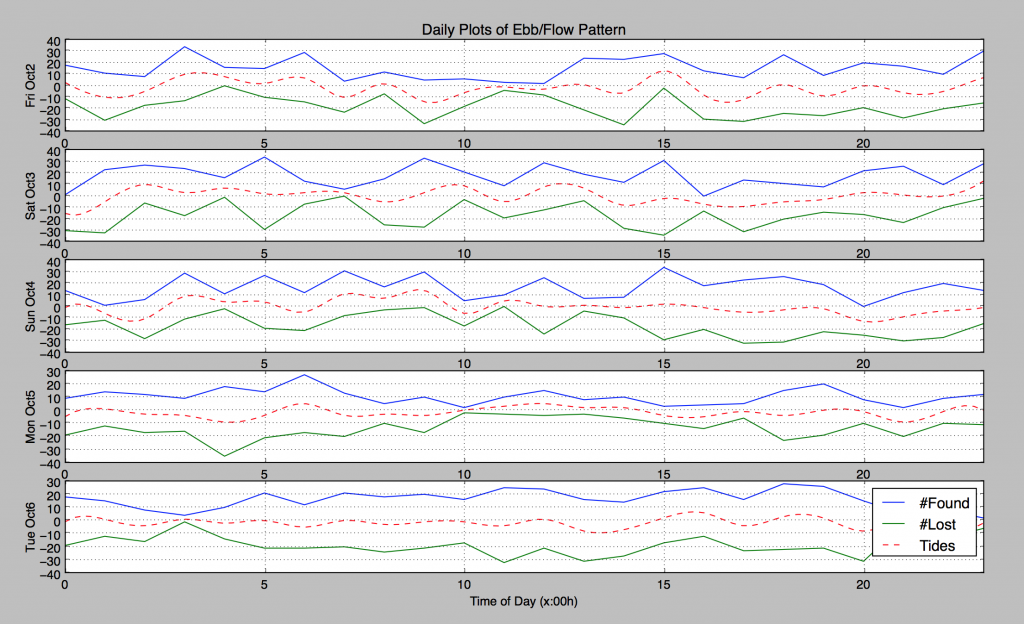 Soundscape:
The soundscape is constructed through a 6 channel speaker setup.  A synthesized tide soundscape is created that flows through the gallery space (from one end to the other)

Video Screen/Projection:
A screen displays the aggregation of the Twitter feeds into a 3D geometric shape (as seen in the following video) and separate smaller screens (between 3-5) line the wall of the installation space, displaying a live feed of the twitter broadcast.

Sculpture/Landscape:
A gravel pit sculpture is also proposed that references the washed up remains of a city.  Users are invited to step on the gravel and walk around on it, adding their footsteps to the sounds in the gallery space.  The size of the pit will be designed when spatial allocations can be confirmed.