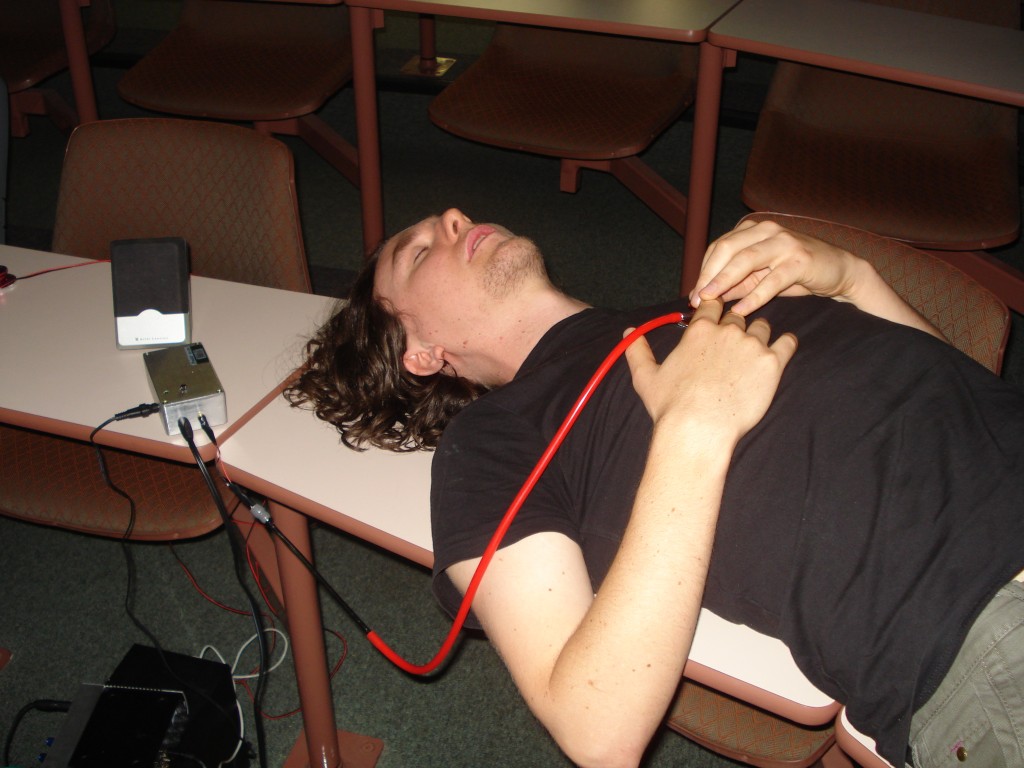 My engagement with the stethoscope and with stethoscopic sound has developed over 2 main projects.

These pieces were also discussed in a lecture-performance entitled On Knowing at the School of Anatomy and Human Biology at the University of Western Australia.  A volunteer was made to lie down on a table during the lecture and hold a stethoscope with a DIY amplification circuit to his chest.  His internal environment formed the background soundscape to the lecture.

The stethoscope is a medical tool that needs no introduction.  Since its invention in 1816 by Dr Rene Theophile Hyacinthe Laennec (1759 – 1826), mediate auscultation has been a key component in clinical diagnostics.  By transplanting the stethoscope from the clinic into the galleries of performative sound art, its repositioning as an experimental sound object presents a unique opportunity to appreciate the auditory potential of the stethoscope.

The stethoscope had heralded a culture of listening that had at its roots an objectivity and aesthetic functionality in the clinical sciences.   The succession of auscultative and percussive techniques also awarded the physician the knowledge of the interiority of the body without the need for ocular technologies and diagnose, with a high degree of accuracy, the problems of the heart and lungs.  The stethoscopic listening process is one that is characterised by an exclusive binaural space, noise-cancellation albeit the interpretation of sounds are based on semantic identification.   While the stethoscope was an important part in clinical diagnostics that even represented the favor of hearing over sight in diagnostic precision, the mode of listening to these sounds were entrenched within the culture of medical observation, which meant that sounds was still grounded in their physiological significance, and in their use as supplementary information to the visual:

Auscultation may be seen to be one of a range of medical techniques that allow the body to be broken down into its physiological components . . . to constitute an auditory complement to, or extension of, a powerful and pervasive visual gaze which is directed in such a way as to make ever more extensive examinations of the substance and behaviour of the human body.   .

My engagement with the listening tool involved repurposing the device for sound propagation in a primarily artistic setting, replacing the semantic language of auscultation with that of reduced listening by altering the context from clinic to gallery, or exhibition.  The endowing of an ‘interiority’ to whatever the stethoscope is placed on also supports the metaphor of a resonating body, and encourages the curiosity-driven exploration of internal soundscapes.