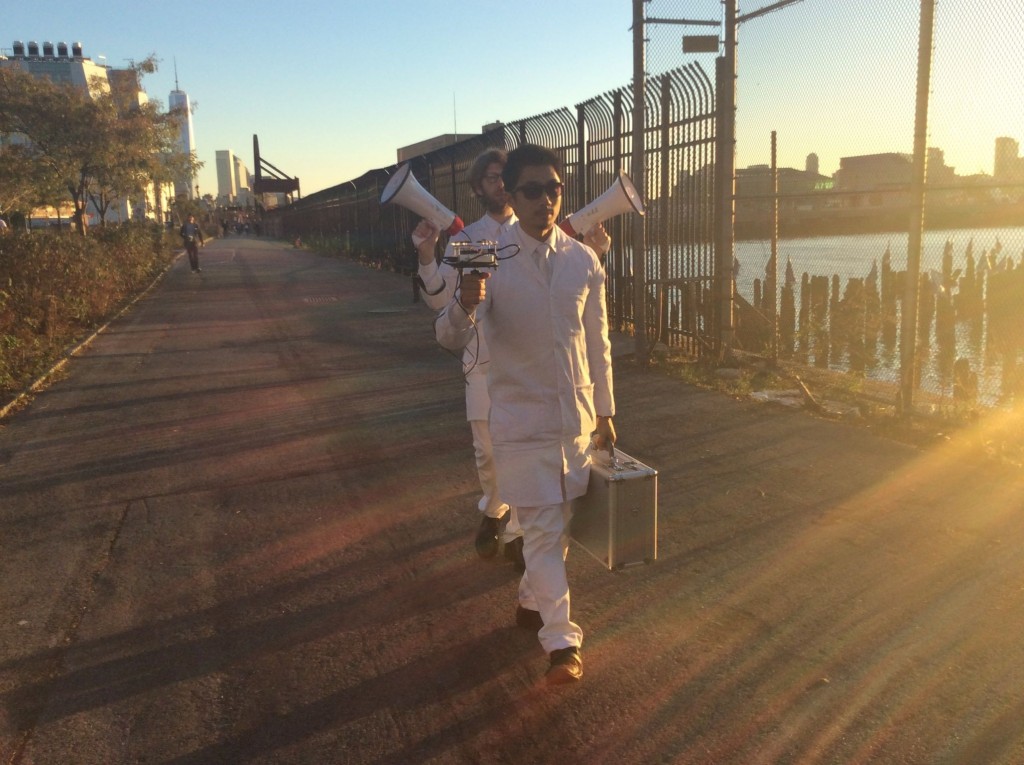 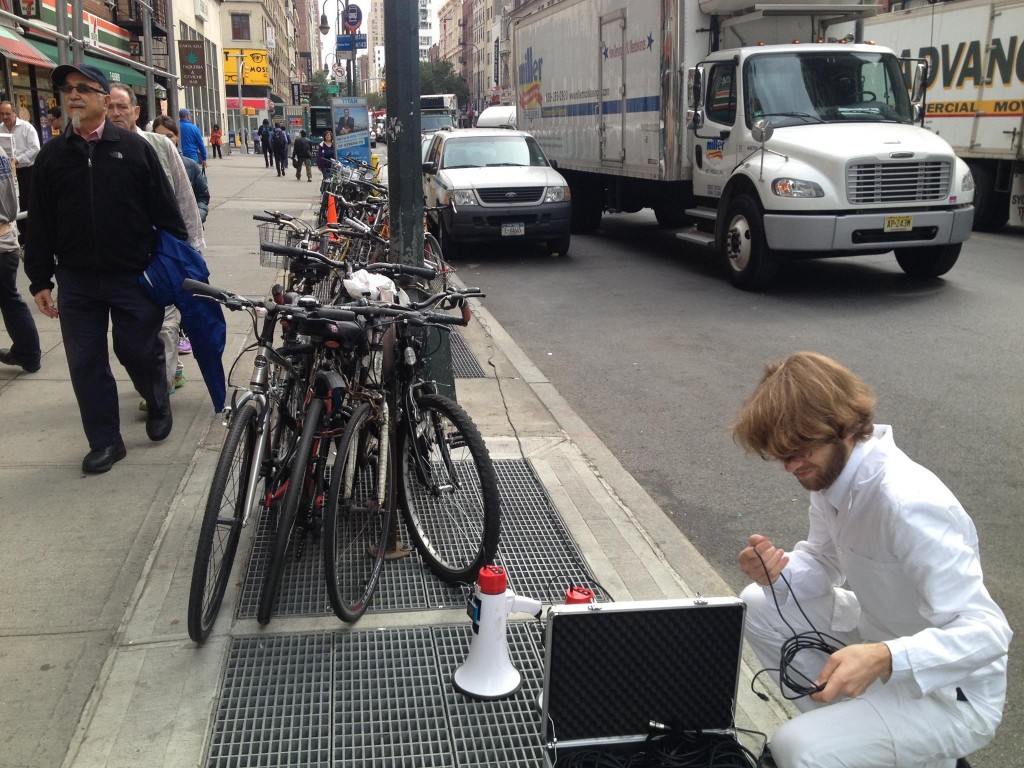 It’s a messy world. What’s invisible and inaudible is not anymore the enigmatic absence that we could never know. The ether, as poetically and historically defined to be the playground of the imagination, can now be proven as an amalgamation of technophonic, radiophonic and electromagnetic radiations. In our nascent access to these areas, it is also becoming the hotbed of surveillance structures, locative media, vicarious transmissions and voyeuristic probing. Is there any room for a poetics of space, or has this been sidelined by a technological imposition on and in our daily lives.

The Man who Knew Too Much is an absurdist performance where the artist locates and reveals ALL invisible and inaudible phenomenon on the street, allowing himself to become an auditory conduit for the invisible soundscapes of Manhattan.  This absurdist soundwalk was performed in Manhatten, NYC in Fall 2014 as part of the Art in Odd Places Festival.  In it, a combination of a “sound walk” and “sound gathering” phases were carried out over the span of 3 days along 14th Street from Union Square through the High Line.

The sounds projected through the loud-hailer systems were simple beats and a mechanical voice reciting the values e.g. 0.5, 0.87,1.2 of the sensor readings.  This produced the theatrics of a scientific (or science fictional) exploration of the quotidian space.  The project also inadvertently fed into latent fears of invisible contagious diseases especially in the face of the recent Ebola epidemic (2013 – ) and in particular, rumors of it reaching NYC.  We were asked if we were sensing viral quantities in the environment, and some people were repelled even after we revealed that we were reporting relatively harmless quantities of sound/air/UV pollution.  Twice we were stopped by the NYPD.

While not being part of the piece explicitly, this particular response created plenty of dialogue about the motivations of our piece, the notion of mediating devices as systems and suspensions of belief, the value, or lack thereof, of fear in public information broadcasts during disease epidemics and even the role of citizen science in mitigating these fears.

The piece originates from the prototype public art piece ShoeGaze, where the artists utilize Situationist strategies to follow and silently record the pedestrian movements of people around them.

The technologies involved in this work include the Raspberry Pi, the Detektor, an electromagnetic detection unit donated by Shintaro Miyazaki a the Institute of Experimental Design and Media Culture in Bassel, Switzerland. 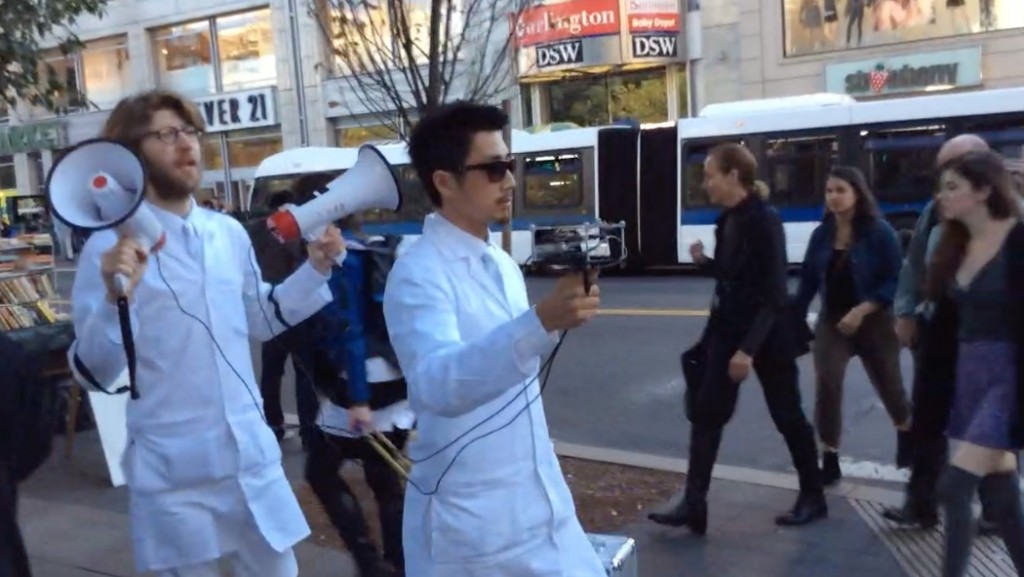 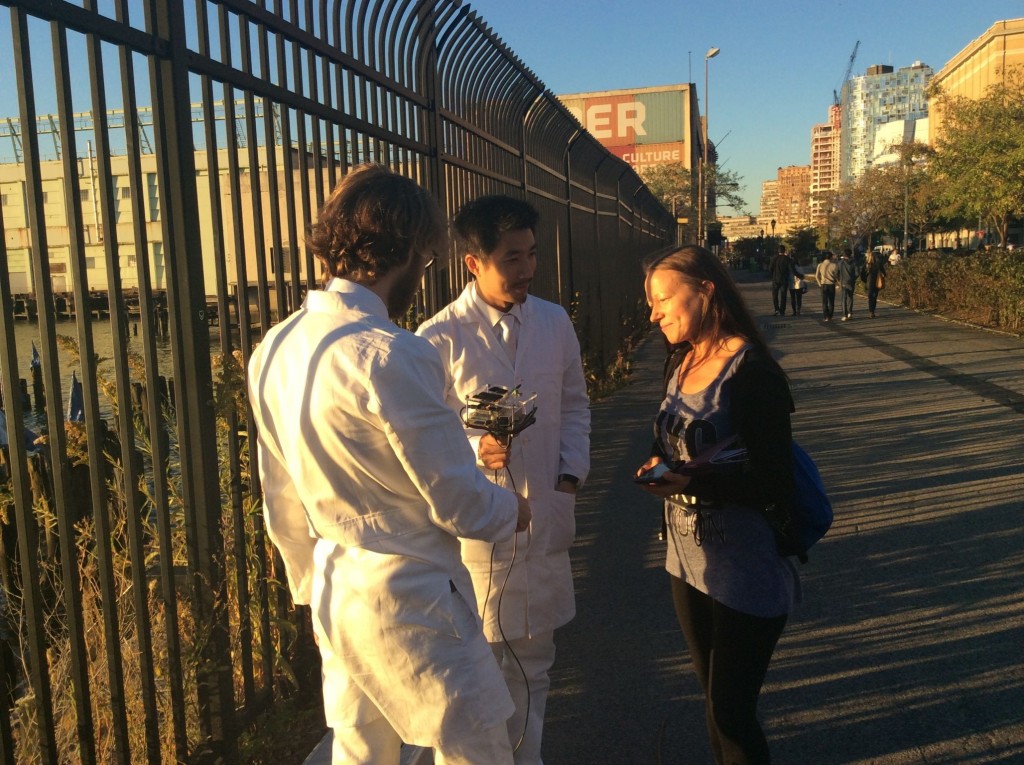 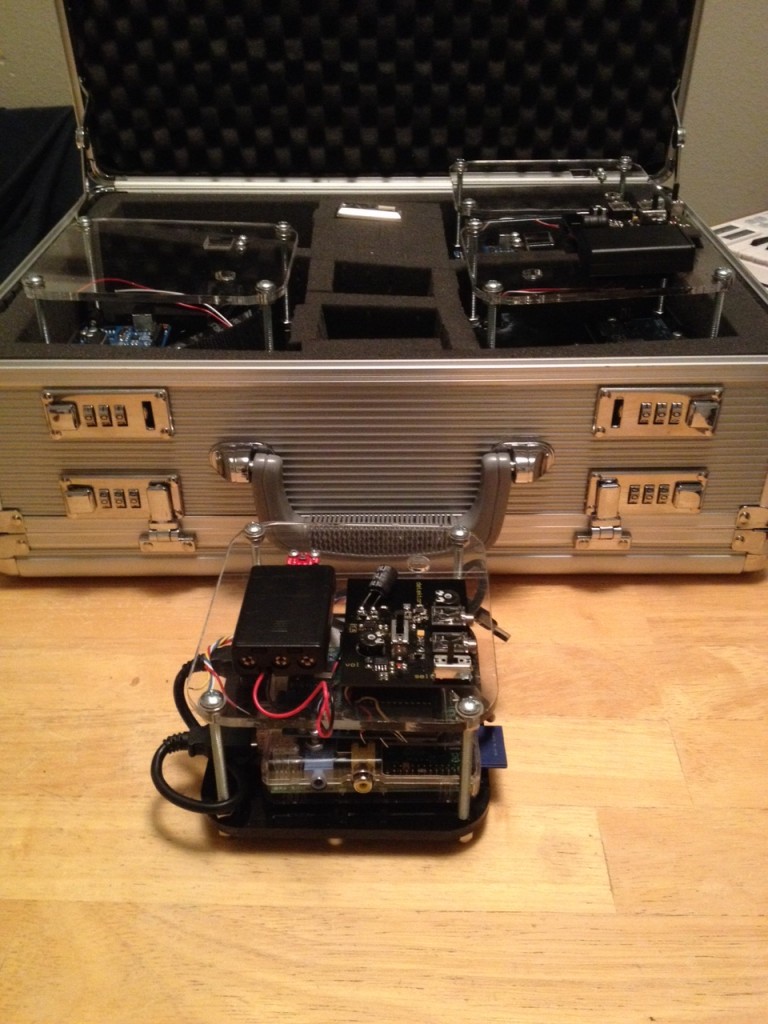 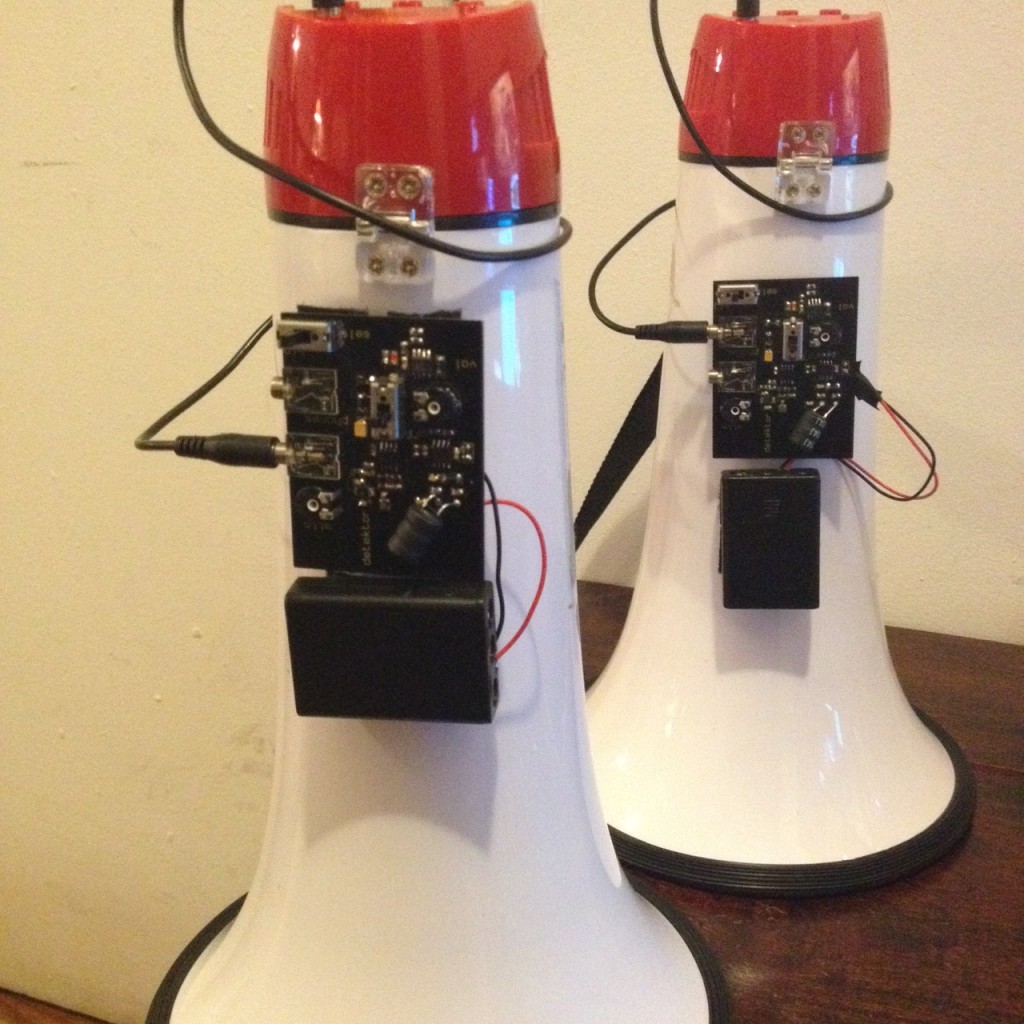 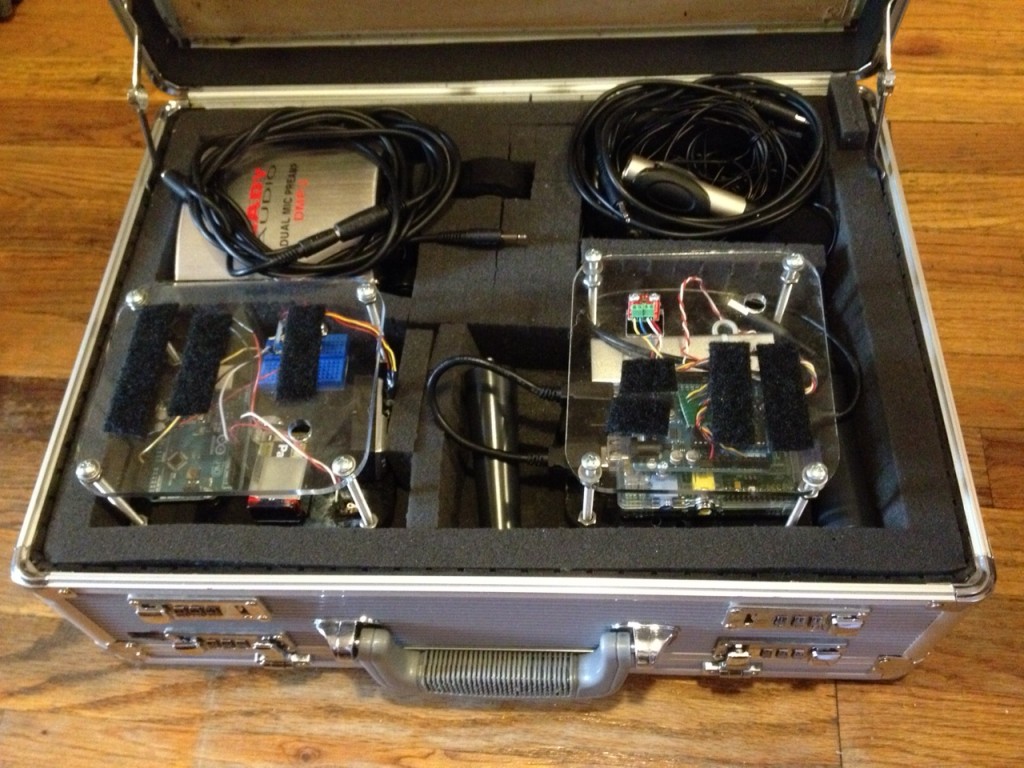